In the next few decades we expect to see a dramatic increase in demand for food to meet the needs of rapidly growing world population. The limited reserves of water and of arable land, their imbalanced geographic distribution, and increased competition for alternative uses, limit the scope of agricultural expansion.

A promising strategy for increasing crop production without increasing the pressure on soil and water resources is promoting the ability of plants and associated microorganisms to improve productivity of the soil ecosystem. Dominant among the ecological actors in such interactions are plant roots and closely associated microorganisms that interact with an immense flux of water (transpiration) of about 50% of all terrestrial precipitation (ca. 50k km3/yr). This immense flux of water must cross a thin interface that surrounds plant roots known as the rhizosphere, making this interface a pivotal hydrological hot spot. This thin layer of soil and biopolymers serves as a habitat for the largest pool of soil microorganisms that live in symbiosis with roots and greatly affect geochemical fluxes and exchange between the soil and the atmosphere.

One key hypothesis of our research is that plants are capable to alter the soil, particularly the soil in their vicinity (the rhizosphere), in a way that their roots have a better access to the available water, as well as to nutrients. Such alterations come about by growth of root hairs and exudation of compounds, such as mucilage and extracellular polysaccharides (EPS), which alter the water retention, diffusion and hydraulic conductivity of the soil. Our research is committed to provide the necessary building blocks for quantifying and predicting soil physical processes that shape the ecology and functioning of the rhizosphere and the roles of other biological interfaces in soil.

By exuding mucilage plant roots change the rhizosphere properties affecting the uptake of water and nutrients from soil. During drying, mucilage increases the water content of the rhizosphere possibly facilitating the water flow across the soil-root interface (Fig. 1). On the other hand, after drying mucilage turns hydrophobic and reduces the wettability of the rhizosphere after irrigation. Although mucilage hydrophobicity seems counterproductive (plants have limited access to water when it is needed the most), it may be an efficient strategy to disconnect roots from the dry soil regions and avoid water losses. 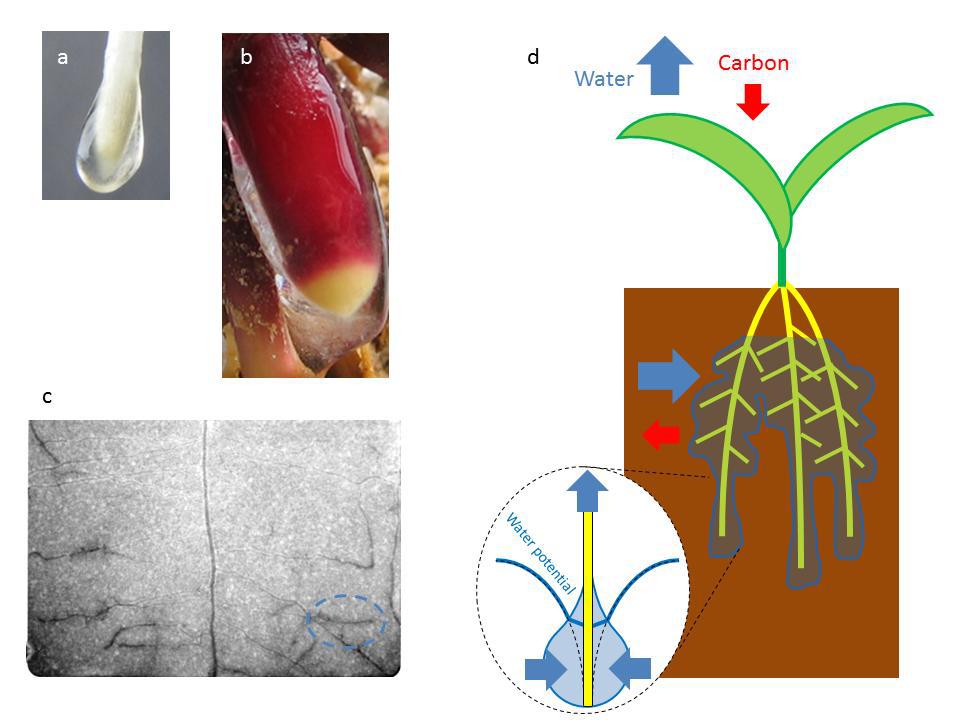 Figure 1: a Picture of mucilage around the root tip of a maize seedling. b Mucilage around the tip of a brace root of a 2 months old maize. c Neutron radiography of roots of a lupine growing in a sandy soil. The picture shows the lower 10 cm of the root system a few hours after irrigation. The grey values are proportional to the water content (dark = wet). Wet regions cover the root tips, indicating the presence of hydrated mucilage. d Schematic description of the model. By exuding carbon in form of mucilage, roots maintain the rhizosphere wet and conductive and decrease the gradients in water potential that drive water towards the root surface. In this way mucilage maintains high transpiration rates and carbon acquisition via photosynthesis. Source: Carminati et al. 2015.

We aim to test and develop new methods to estimate water fluxes in soil and roots. Of particular importance was the development of a method to estimate root water uptake by tracing heavy water (D2O) in soil and plants with neutron radiography (Fig. 2 a,b) and reconstruct the convective fluxes using a diffusion-convection numerical scheme and solving the inverse problem (Zarebanadkouki et al. 2012; 2013; 2014; Ahmed et al. 2015). Such method can be used to characterize the hydraulic traits of different crop varieties and their rhizosphere, and test their capability to take up water and tolerate drought.

An additional imaging method is X-ray CT, which allows to image root architecture, soil structure and (at higher resolution) even the root hairs (Fig. 2b) and the spatial configuration of the gas-, liquid- and solid phases in soils (courtesy of Dr. Stefan Gerth, Fraunhofer-Institut für Integrierte Schaltungen IIS).

To characterize soil-plant water relations we make use of the root pressure chamber method developed by John Passioura. The method allows to monitor the tension in the xylem of plants exposed to drying soils and varying evaporation methods. This unique method provides the biophysical constraints on water flow in soil and plants. 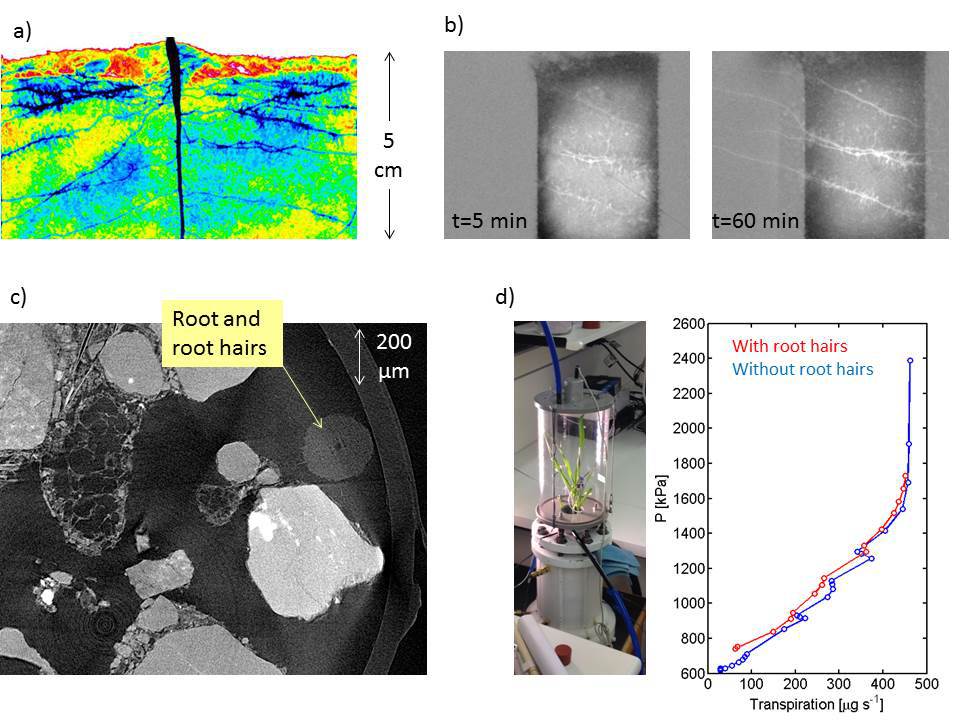