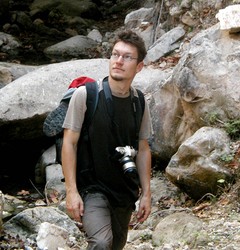 My research interest focuses in bacteriome-associated endosymbiosis in the hemipteran subgroups Heteroptera (true bugs) and Coleorrhyncha (moss bugs). Especially representatives of the superfamily Lygaeoidea (Heteroptera: Pentatomomorpha) offer numerous  bacteriome-associated endosymbiosis that are clearly different from each other. The structure and localization of the bacteriomes as well as the contained endosymbionts exhibit a significant variance. Such a variety of different endosymbioses in such closely related insect hosts could be detected only in few insect groups so far.

My current research focuses on:

(1) Screening and characterization of endosymbiosis in different species of Lygaeoidea and other heteropteran bugs.

(2) Analysis of functional roles of the endosymbionts in Heteroptera and Coleorrhyncha.