The prediction of solute export from entire catchments is complicated. Recently this topic has gained attention due to the worsening problem of nitrate pollution throughout Germany. In many places nitrate concentrations in groundwater and streamflow remain high or even increase although the input has already been decreasing for a while. This can be attributed to the fact that a certain fraction of water and pollutants can take flow paths with extremely long transit times on their way through the soil and bedrock layers and out of the catchment system which creates the so-called legacy effect. Due to this effect the hydrochemical response of a catchment can be significantly delayed which is both good and bad. It is good since it dampens and dilutes pollution events and it is bad since it leads to the long-term retention and continuing seep-out of pollutants long after the pollution input has ceased.

Our aim is to determine which physical catchment and climate characteristics control whether a certain catchment has a stronger legacy effect and is therefore prone to retain larger amounts of pollutants for a longer period of time. There are many potentially important characteristics we are going to examine in terms of how much influence they exert on catchment transit times, e.g. soil and bedrock hydraulic conductivity, soil depth, soil moisture state, annual amount of precipitation and vegetation cover. 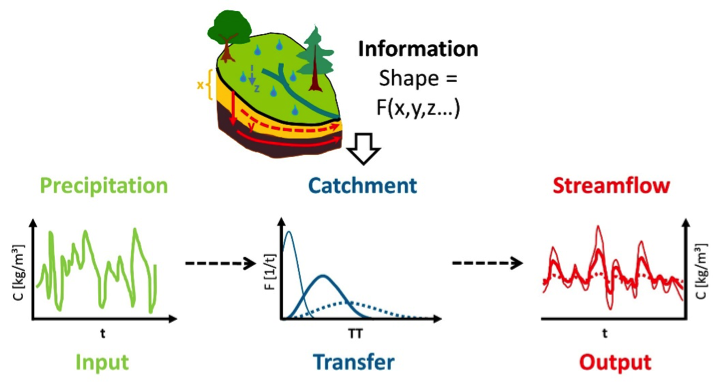 Figure: Using physical information on certain catchment and climate properties (x, y, z …) to predict the legacy effect of pollutants in a catchment (via the shape of transfer functions).

In a virtual experiment in a study that forms the basis of this project a physically-based, distributed model (HydroGeoSphere) was used to examine how the legacy effect changes spatially between catchments with different properties and how it changes temporally within one catchment with changing antecedent moisture content. Now we aim for the verification of the results of the virtual modeling study with the help of empirical field data in real-world catchments. To this end we are using discharge and nitrate time series of the freely accessible data base Germany, select, set up and calibrate six uniquely representative (archetypal) catchments in HydroGeoSphere and compare the resulting transit time distributions with the ones that were produced with the virtual catchments.

Further details on the project at: