The role of valleys in the isolation, distribution and dispersal of endemic species

Introduction: Patterns of species diversity along elevational gradients have been well studied.  The role played by other topographic variables, such as valleys, have been largely neglected however. Recent evidence has suggested that speciation rates increase with elevation due to increasing isolation from equivalent climates. Here, we test this idea using valley depth as a predictor of speciation rate. Deeper valleys are more isolated, because we expect geographic isolation which again leads to geographic variation and speciation.

Material and Methods: We collected plant presence-absence data from 76 plots in 8 valleys on the northern coast of La Palma. Valley depth was calculated for each valley using digital-elevation models in GIS. We calculated the proportion of single-island endemics (pSIE) and archipelago endemics (pAE) for each plot. Multivariate regression was used to evaluate the effects of valley depth and elevation on the pSIE and pAE.

Results: Analysis of the valleys showed that there was no clear relationship between the proportions of endemics at different elevations and depths. While pSIE shows no relationship with elevation, the pAE increases with elevation. Therefore, there are more AEs towards the coast.

Conclusions: : In isolated valleys, valley depth has no effect on pSIE and hence does not play a role in speciation rate. The other parameters such as dispersal may have more effect on endemic distribution. 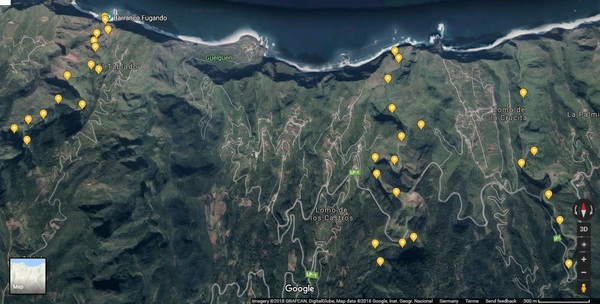