Since the 1980s an increase in dissolved organic carbon (DOC) concentrations in waters of the Northern hemisphere has been observed. However, no general explanation has been found so far. Our project focuses on investigating the mechanisms influencing DOC mobilization and export in the streams in the national park as controlled by topography.

Three continuous sampling sites have been established in different topographical positions in the catchment of the Große Ohe: at a steep hillslope, in a transition zone where the steep hillsides level off and in a flat and wide riparian zone. At these three locations, DOC concentrations are measured continuously using UV-Vis spectrometry. In addition, longitudinal sampling is conducted regularly in order to analyze water chemistry parameters at 16 sampling points along the investigated stretch of about 3 km.

Discharge as well as DOC concentrations in the stream rise fast as response to rainfall events. Plotting DOC vs. discharge has revealed a non-linear relationship, i.e. hysteresis. This hysteresis develops in an anti-clockwise direction at the sampling point with the wide riparian zone and clockwise at the sampling point in the steep hillslope. The longitudinal sampling shows a clear difference in water chemistry between the upper and the lower part of the catchment.

Different mobilization mechanisms seem to take place at the different topographical positions. In riparian zones the groundwater table rises in the soil profile as response to precipitation and transports DOC from upper soil layers towards the stream (transmissivity feedback). DOC increases with some delay with regard to the beginning of the precipitation event. In the steep hillslopes first-flush mobilization plays an important role due to fast and near-surface run-off, which flushes DOC out of the humic topsoil. Hence, DOC concentrations increase fast and almost immediately with the start of precipitation. 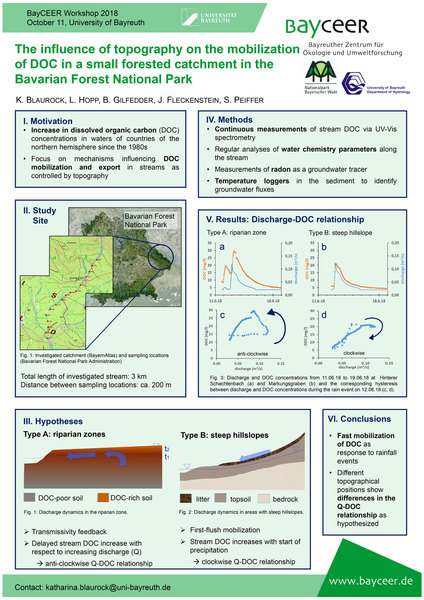