Invasive species are considered to be one of the major threats to biodiversity, but in fact the impact of an invasion is often difficult to assess because of its dependency on several contexts. Impatiens glandulifera is an excellent model species to study context dependencies. For although I. glandulifera heavily invaded several habitats in Central Europe its impact on native plant communities is ambiguous. We hypothesize that growth of I. glandulifera and its impact on plant communities depends on micro-site conditions leading to that ambiguous results.

We evaluated micro-niche characteristics of I. glandulifera stands considering abiotic factors as well as plant species composition at five riverside sites in the region of Bayreuth that were invaded by I. glandulifera. Investigated habitats ranged from mesotrophic grasslands and tall herbaceous vegetation to elder woods. In 114 systematically arranged plots we gathered the plant species’ identity and cover as well as soil moisture and light conditions. 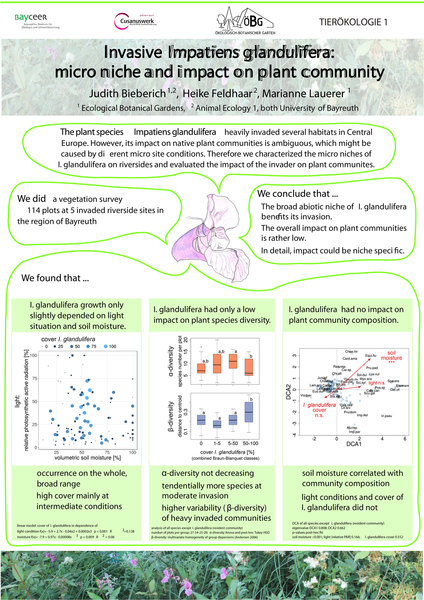