Vulnerability of forest stands to storm damage - How well can we model critical wind speed?

Winter storms, such as Lothar or Friederike, have caused large-scale damage to forests in the past. The frequency and severity of such winter storms is projected to increase, which makes an assessment of vulnerable areas essential for forest management.
In the project "WINMOL - Detection and Prediction of Storm Damage in Forests" we model the vulnerability of forest stands to wind at the individual tree level using the deterministic storm damage model ForestGALES (FG). To gain understanding for the model’s limitations, we tested the standard model setup on plots of the research station "Britz" in Brandenburg, where individual tree data has been collected since 1992. In a preliminary step we used the tree growth model BWIN to simulate the growth of one pine and one beech plot from 1992 to 2020 and to project the future growth of these plots up to 2050. Afterwards we calculated the critical wind speeds with two different methods for (a) the individual trees and (b) as a mean for the whole plot. We then compared these critical wind speeds modeled by FG to reference wind speeds from the closest weather station operated by the German National Meteorological Service. We found that the measured individual tree parameters are mostly within the range of the BWIN model results, whereas the critical wind speeds differed between the plot-wide method (b) and the single tree method (a). In addition, the critical wind speed generally decreases as the stand age increases. Modelled critical wind speed is lower than the measured wind speeds even though no trees in the two plots were damaged by strong winds. The disparity between reality and the model result calls for an investigation on the reasons why FG performs poorly in German forests. After adapting FG to German conditions, we want to examine the influence of species-specific individual tree parameters as well as different forest management types on storm damage risk to provide guidelines on how to decrease the risk of damage. 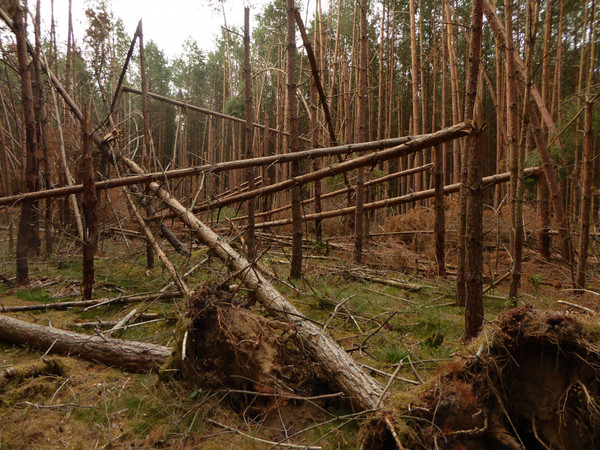