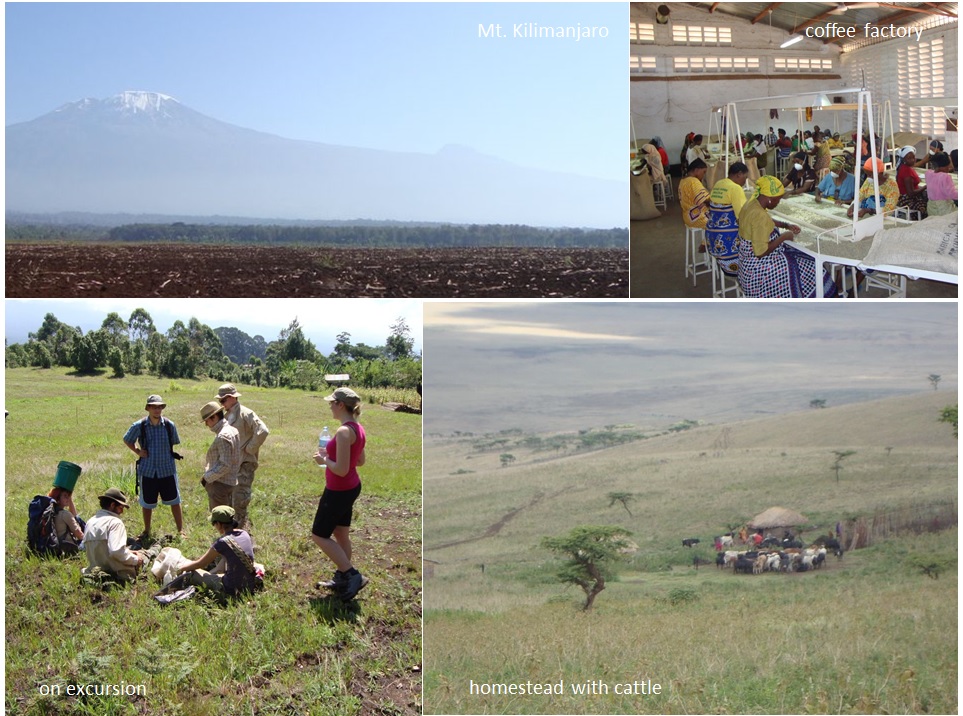 The Ecology of Kilimanjaro: Future of Kilimanjaro ecosystems (Speaker from Ministry of Environment and Natural resources/University).

Management and conservation of the Kilimanjaro National park and its surrounding.

Agroecosystems: Management, Marketing and challenges to the coffee industry.

A preparation seminar has been held which discussed the following topics in detail:

2. Development of the current arid zones

3. Distribution of tropical savanne and forests and fluctuations during the Holocene

7. Ecosystems of the Mt. Kilimanjaro region

Scientific Focus and Location of the Excursion

The Mount Kilimanjaro region may be viewed as a model system with respect to the impacts of climate change in East Africa. Global atmospheric circulation patterns control the monsoon rains that fall in high elevation areas across East Africa, that support local populations on mid-elevation plateaus, and that subsequently supply runoff water to lowland cultivated arid regions and animal populations of the well-known natural savanna grazing ecosystems. The focus of the planned excursion is to provide a first-hand knowledge of potential climate change and these water cycle links to a group of young students, that have a future interest in carrying out research on global change in East Africa. The University of Bayreuth has an elite graduate program in African Studies, but this has a social science and cultural geography orientation. The planned excursion is complementary and part of an effort to expand interest in natural science challenges in East Africa. The Mount Kilimanjaro region is chosen due to easy accessibility, excellent logistic support due to the tourism in this area, the ability to view many systems in a small geographic area along the elevation gradient of Mount Kilimanjaro, the dependence of a dense population in the region on water delivery from the mountain, the strong and easily identifiable indicators of climate change and the associated long-term research interests in my department with respect to land use management in African savannas.

Mount Kilimanjaro rises from the savanna plains at 700 m elevation to a snow-clad summit at 5895 m a.s.l. Its climate is characterized by a bimodal rainfall pattern with the “long rains” from March to May (the main rainy season), and the “short rains” occurring around December. The foothills of the southern slopes receive an annual rainfall of 800-900 mm, and the forest belt at 2500 m may receive more than 3000 mm (Hemp 2001), which is more than on other high mountains of East Africa. A dry and hot savanna zone surrounds the mountain base between 700 and 1000 m a.s.l. Most of this area is used by the native population for crop production (maize, beans and sunflowers) or as pasture land. Remnants of the former savanna vegetation are encountered close to the mountain around Lake Chala in the eastern foothills, but increases in dominance as one moves away from the mountain water source. The submontane forest belt between 1000 and 1800 m is continually being converted to coffee-banana fields in the “Chagga homegardens”, a special type of agroforestry. Here the human population reaches a maximum density of more than 500 persons per km2.

Thus, the Kilimanjaro region includes a broad range in land use systems (e.g., natural savanna and montane forests, sustainable agroforestry systems, intensely used crop fields and coffee plantations, and pastoralism). The life styles of the different tribes living on or near the mountain are completely different. The Chagga live from agroforestry in their traditional multi-crop home gardens on the mountain slopes, while the Masai are supported by cattle husbandry and increasingly also by monoculture of maize in the foothills.

Kilimanjaro is the main water catchment for north Tanzania, feeding the Pangani river system. However, during the last century precipitation on Kilimanjaro decreased by about 30 percent (i.e. by between 400 and 1000 mma-1) (Hemp 2005), whereas temperature data reveal a drastic increase since 1976. These climate changes have caused not only the retreat of the glaciers, but also increased fire at high elevation, shifting the upper forest treeline downward by ca. 800 meters. During the last 70 years Kilimanjaro has lost nearly half of its forest cover, in the upper areas due to climate change and increased fire, and at the lower forest due to clearing. Since the forest zone acts to collect water, especially in the cloud forest zone, modifications in vegetation distribution will likely lead to reduced water yield at the base of the mountain. In the Chagga home gardens, extensive irrigation systems have been built to distribute water from the mountain to support the population. The loss of interception at high elevation may pose a serious threat to the long-term sustainability of their livelihood. The problem is compounded by high population growth and increasing water demands. Tourism adds to this burden, but simultaneously contributes to economic welfare of the region.

High mountain regions have been described as the water towers of the world, providing the water supply for downstream food production, public water supply and electricity generation. Landscape water balances and stream water yield, especially in relation to land use change, have long been of interest in tropical East Africa due to expansion of agriculture and increasing population after World War II (Olembo 1979). Small catchment hydrological studies in initially forested mountain areas in Kenya, Uganda and Tanzania begun in 1957-1958 demonstrated that the influences of land use conversion from natural forest to more intensively utilized crops and plantations are not necessarily negative (Blackie and Edwards 1979; Edwards and Blackie 1981). However, the response is complex and depends strongly on local soil properties as they determine infiltration rates, on shifts in interception, and on the dynamics of transpiration as it determines time dependent changes in soil moisture storage. Due to differing climatic, geological and pedological conditions at different sites in East Africa, many fundamental problems of soil hydrology like spatial variability, runoff generation on slopes, or soil/root interactions remain poorly understood. Similarly, water use by vegetation, while understood in principle for ecosystems of the Mount Kilimanjaro region, requires further study in order to contrast and understand shifts in the water cycle that result from land use change.

Sequentially, the excursion will examine aspects of the water cycle along the gradient from mountain forests, to the densely populated low elevation slopes of Mount Kilimanjaro, and then the surrounding low elevation foothills. In this way, through field observations, discussions held in the field, and presentations about the region by experts, an understanding will be developed in relation to factors influencing the water supply, the modifications of water flows by the native populations, and by water use in home gardens, plantations, urban areas, the lowland agricultural efforts of the Masai and in natural savanna regions.

In particular, the modifications in local climate and in land cover in the populated areas will be examined. Presence or lack and the degree of water use by the vegetation leads to strong differences in the microclimate of locations along the chosen transect (excursion route). These differences can be easily studied during the day excursions (see time plan below), and systematically summarized for the time period of maximum stress during the dry season. These exercises will provide the students with a good appreciation of the meaning of shifts in water balance that are occurring due to anthropogenic activities and use of the natural water resource.

Additionally, it is useful to demonstrate so-called “sapflow methodology” to students, since it provides the best possible way to obtain comparative information on transpiration by plants along the elevation gradient at Mt. Kilimanjaro. The methods developed by Granier (1987) to measure water transport in the xylem of plants have been successfully applied in the assessment of water use by banana under field conditions, in coffee, in savanna trees, and in tropical forest trees. Students will have a chance to set their own measurement stations, from which they shall be able to read out, analyze and compare data from different elevations and identify critical driving factors of forest water use.

The vegetation in savanna regions is known to tap deep soil water resources via “hydraulic lift” during dry seasons; moving water from deep soil layers toward the savanna trees and shrubs via their root systems, replenishing shallow soil water reserves, and supplying for the needs of evapotranspiration and supporting metabolism. Scott et al. (2008) demonstrated for mesquite savanna that fluxes from the surface layers after rain to deep layers via the tap roots (internally) may be as large as maximum taproot transport rates from the deep soil to supply transpiration during active periods. Thus, such mechanisms for increasing soil water storage prolong production and ecosystem activity. In this way, hydraulic redistribution undoubtedly influences biodiversity in the savanna and could even influence production in Tanzanian coffee plantations. During the exercise component of the excursion, we will try to demonstrate this behavior by installation and monitoring of sapflow sensors placed in trunks, shallow roots and tap roots of savanna trees (see time plan below) alongside already established measuring systems.

Overall the excursion plan provides the students with opportunities to better appreciate ecological phenomena and adaptations of the vegetation, the role of human activities, and global change in terms of climate and land use that are responsible for landscape and regional water balances. The water balance in turn will determine whether resource use in the region is sustainable or not. These aspects will be discussed during SS2011 in a follow-up seminar together with the excursion participants.

Granier, A. 1987. Evaluation of transpiration in a Douglas fir-stand by means of sap flow measurements. Tree Physiology 3:309-320.

Hemp, A. 2001. Ecology of the pteridophytes on the southern slopes of Mt. Kilimanjaro. Part II: Habitat selection. Plant Biology 3:493-523. 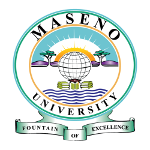 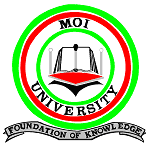