TP3 Influence of multiple stressors on N, C and Fe turnover in the hyporheic zone

What is it about? 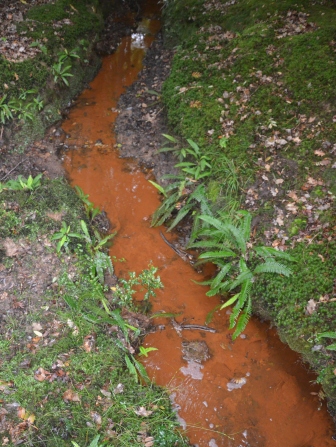 Climate change is expected to increase the frequency of periods with little or no rainfall, which will lead to low water levels and flow in streams. Such dry periods have been observed several times in Bavaria during mid and late summer over the last decade. During such draught periods there is an increased risk that certain spots of steam sediment have little or no oxygen, which is both chemically and biologically relevant for stream health. The low oxygen levels induces a whole series of chemical reactions, which are easily recognized by the precipitation of reddish brown iron hydroxides on the steam bed, vegetation and other stream material.

When and where do such oxygen-free zones occur? What is the influence of elevated temperatures, low discharge rates and sediment input on their development? The results of this subproject are important to assess the future water quality of streams and their ecological status.

...and as scientists would put it:

The hyporheic zone describes the interface between ground and surface waters. It plays a significant role in the ecology of streams and their self-cleaning potential. In this project, we investigate the hypothesis that changing climatic drivers significantly endanger the function of the hyporheic zone. Increased temperature leads to increased respiration and formation of oxygen-free areas, and accelerated deposition of fine sediment. Under conditions of stream low water levels (with high proportion of groundwater) reduced substances enter the upper parts of the hyporheic zone and surface water. The contact with atmospheric oxygen leads to formation of areas of preferential oxidation of reduced substances (iron clogging, nitrification). In this project the effect of climate stressors (fine sediment loading, temperature and discharge regimes) on the N and Fe cycles will be investigated in experiments involving the manipulation of pore water chemistry in flow channels (flumes).

In addition, field experiments on selected streams will quantify the groundwater exchange flux at various locations using the natural tracer radon and evaluate the results from these measurements with new software developed at the Department of Hydrology. These measurements will be combined with temperature and geochemical profile measurements in cooperation with other subprojects with the aim of identifying the groundwater inflow and outflow areas and thus inferring the spatial and temporal heterogeneity on the scale of a river section. Oxygen microelectrodes are used for the redox chemical characterization in the field and in flow channels to obtain high resolution chemical information on micro ‘oxidation hot-sots’ within the hyporheic zone.