Ongoing human exploitation of coastal ecosystems is leading to anthropogenic stress for the organisms inhabiting the tidal and littoral zone. Sewage release, intensive fishery or tourism-associated activities are the result of human island use and act as stressors that can alter the composition, reduce or even cause the extinction of the faunal communities. Differentiating between the impacts of land uses is often limited, as multiple forms of land use are affecting the ecosystem simultaneously. To circumvent this problem, the present study analysed the impact of different land uses by investigating small coral islands, which were either accommodating only a tourist facility, or inhabited solely the local population that used the island for fishery, or were completely uninhabited. As an exemplified organism, terrestrial hermit crab populations together with their utilized gastropod shells were analysed and compared between these three island types. On tourist islands, the hermit crab abundances were significantly reduced, although enough empty shells were present. On local islands, the abundance was not affected, but hermit crabs were reduced in size and alterations in the gastropod community were observed. This study identified new forms of human impacts on hermit crab populations and demonstrated how variable the impact of different human activities can be for an ecosystem. Furthermore, it is emphasized that terrestrial hermit crabs together with their utilized gastropod shells can be used as an alternative and rapid assessment tool for evaluating the anthropogenic impact on coastal ecosystems for future conservation efforts. 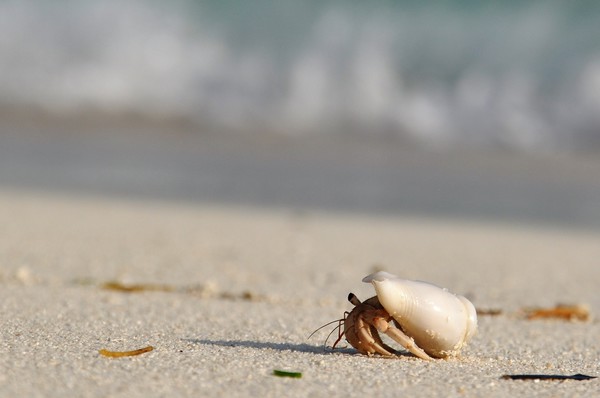