Here are the main results of our latest publication from the research project "stoichiometric homeostasis of soil microorganisms as a driver of element cycling in grasslands" within the Emmy Noether program.

Elemental stoichiometry constitutes an important concept linking biogeochemistry and microbial C and N cycling, and thus is at the core of ecosystem functioning. Terrestrial ecosystems have experienced rising N and partly P inputs during the last decades changing soil C:N:P availabilities. Yet, the microbial response towards shifting soil element stoichiometry is not well understood. We investigated how long-term N and P additions affect microbial community composition, and to what extent microbial homeostasis explains changes in different processes involved in soil C and N cycling in response to element addition. We studied a 66-year-old nutrient addition experiment in a mesic grassland in South Africa, consisting of four different levels of N addition (0, 7, 14, and 21 g N m-2 yr-1) with and without P addition (0, and 9 g P m-2 yr-1). 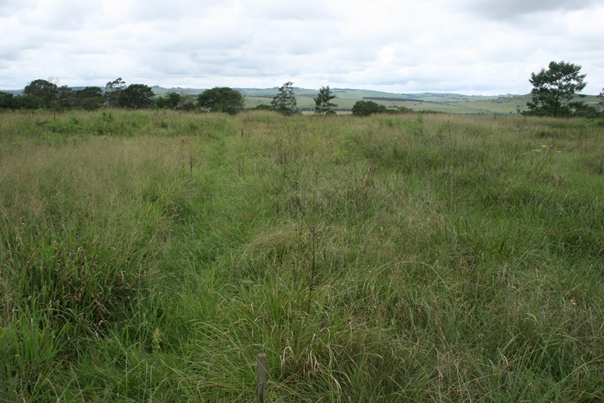 We show that despite strong changes in the microbial community, the microbial C:N ratio did not change in response to N-addition. The abundance of genes involved in C cycling increased with elevated N availability indicating an upregulation microbial C acquisition. In addition, microbes invested less into peptidases and increased net N mineralization. Our results suggest that changes in the rates of element cycling processes can largely be explained by the property of the soil microbial biomass to adjust metabolic processes to maintain its biomass stoichiometry. 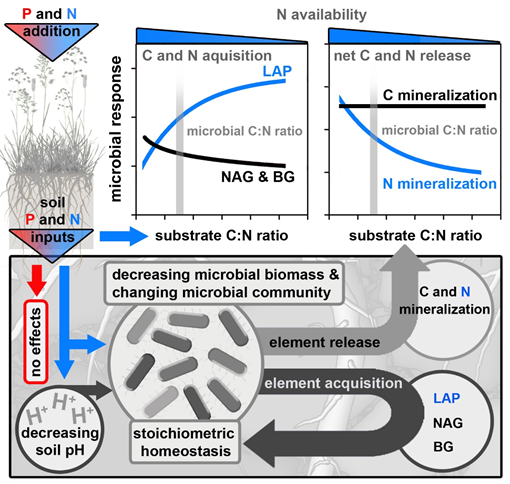 Figure 2: Conceptual figure summarizing the main responses of element cycling: for C (in black), N (in blue) and P (in red). Abbreviations are: (BG) for β-glucosidase, (NAG) for N-acetylglucosaminidase, and (LAP) for leucine-aminopeptidase activities. We show that microorganisms increase C acquisition and N mineralization in response to N addition, which allows the microbial biomass to maintain its biomass stoichiometry. Decreases in C mineralization rates in soils under N addition, however, were not driven by the stoichiometric relationship between the microbial biomass and its environment, but mainly by soil acidification resulting from long-term N addition.

At the Europoean Geosciences Union general assembly (EGU) 2019, 16 273 scientists from 113 countries presented 5531 oral, 9432 poster, and 1287 PICO presentations. Among those were many scientists from Bayreuth, including us, the micrometeorology group.

For us, Toni and Anita, it was the first or second time at EGU, respectively. We were impressed by the sheer range of the scientific contributions: microplastic, lightnings and thunderstorms, citizen science, geoscience games, sea level rise and many more. We often had a hard time deciding which session to go to. With all this input, we quickly learned not to miss the free coffee as we needed these coffe breaks for resetting our brain.

In addition to the presentations, the EGU also offered workshops for early career scientists, lots of networking opportunities and many interesting people to talk to. For us it was eye-opening to meet some scientists whose papers we had read before and to realize that they are, in fact, normal people. Furthermore, the EGU offered the opportunity of discussing practical questions about the research, which aren‘t mentioned in papers.

From the scientific point of view, especially the atmospheric science sessions were interesting for us. As the research of the micrometeorology group covers many different fields, our team  contributed 6 presentations (1 PICO, 3 posters and 2 orals) in 5 different sessions on urban climate, precipitation and boundary layer meteorology. We received a lot of helpful and positive feedback, had some interesting discussions, and are already looking forward to our next time at EGU. 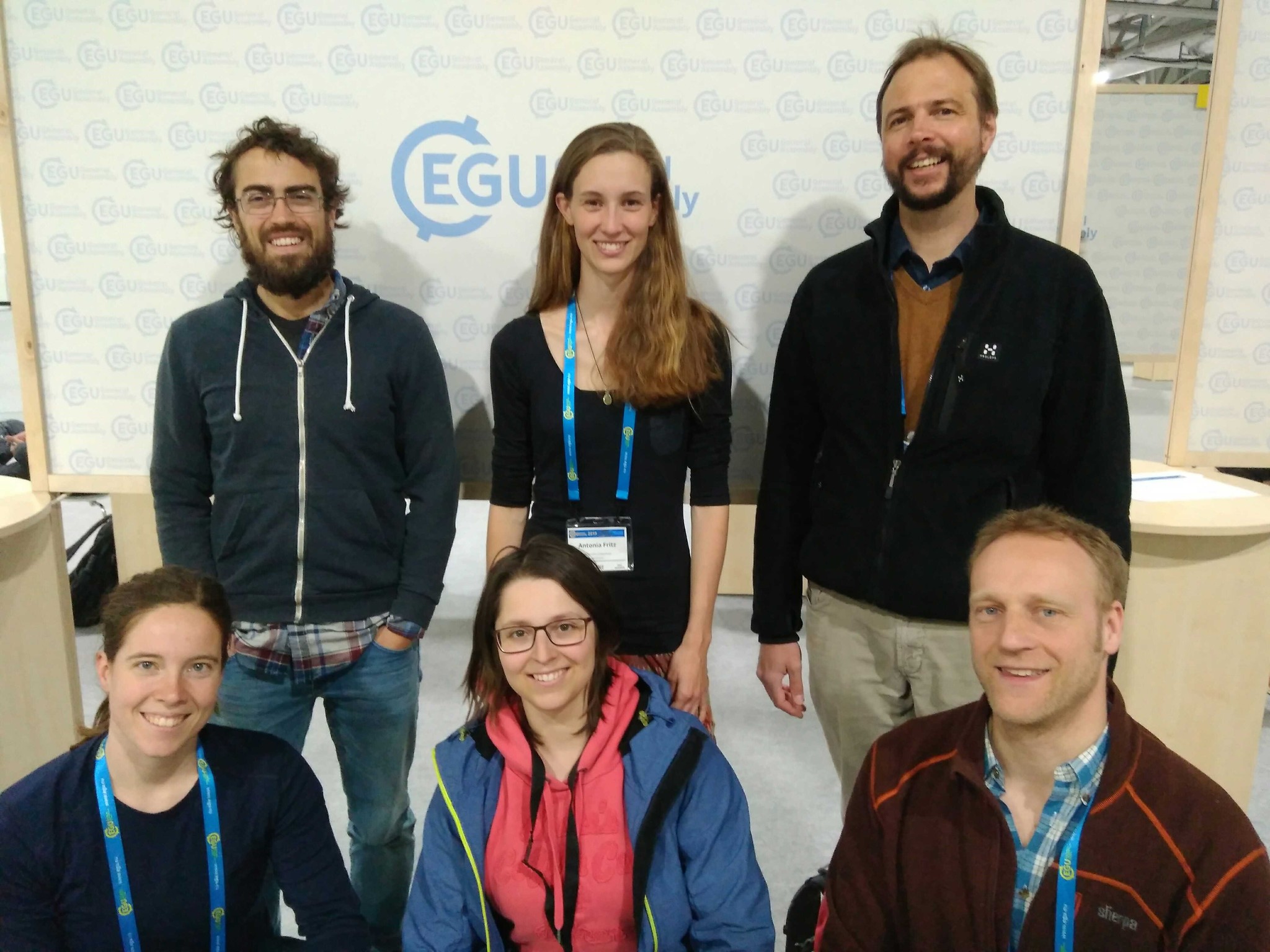 Flying halfway across the globe to dig in the dirt – a research stay in Bloomington, USA

Within my PhD, I have a collaborative project with the Phillips lab at Indiana University (IU) in Bloomington, Indiana, USA. Together, we are researching forest-nutrient cycles and the role of mycorrhizal fungi which form a symbiotic association with plant roots.

During October and November 2018, I stayed at IU to work on my research project and learn more about the American way of life. The PhD student from the Phillips lab collaborating with me, Adrienne B. Keller, is working on the plots I used as well and could show me how to find the chosen trees in a dense and mountainous forest site. Luckily, close to the campus there exists a field site, Moores Creek Research and Teaching Preserve, with a forest harboring trees with either symbiotic fungi on the root surface (ecto-mycorrhiza) or symbiotic fungi within the root (endo-mycorrhiza), which is exactly what we are looking for. The aim of my project is to measure differences in the decomposition of organic material in the soil by the different fungal types and the consequences of this for the nutrient cycling in the respective ecosystem. For this, I measure the stable isotope signatures of plant material, soil fractions and different fungal functional groups.

In addition, a lot of environmental parameters are monitored: soil temperature, soil moisture, nutrient content, root biomass and more.  To achieve these parameters, soil samples and cores have to be taken, transported to the lab and processed (e.g. sieving to a certain size, removing roots and biota). The group of the Phillips lab was very helpful by finding equipment in the lab (it’s amazing what kind of English words you can learn when searching for equipment) and with instruments for the field work.

In the field, I could enjoy the Indian summer with impressive leaf colors, lots of mushrooms coming out and fancy animals like orange frogs and lizards. At the University I attended a Science fest, where all departments showed parts of their research, and I visited the Glasshouses and enjoyed nice and thoughtful talks. Alongside work, I was impressed by the variety of restaurants one can find in Bloomington. You feel that you can travel around the world by tasting dishes of all kinds of countries (e.g. Nepalese, Indian, Korean, Arabian). A nice Farmers market is held every Saturday at the center of Bloomington, where one can find local food and nice handmade crafts – a very good option for Christmas shopping. 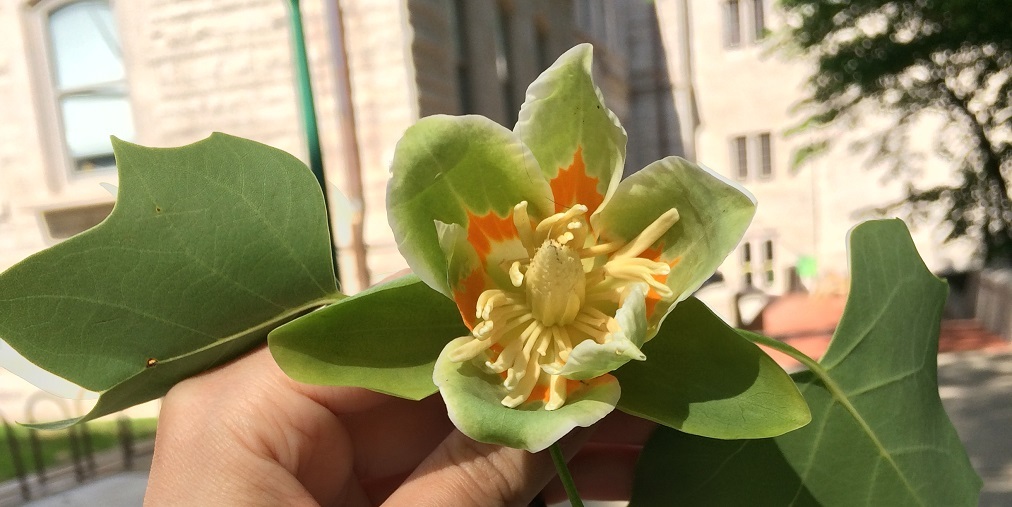 As I visited during October and November, I got to experience Halloween and Thanksgiving. Halloween actually is a big event with all kinds of costumes, parties and sweets. Even the restaurants are decorated with spider webs, pumpkins and scary witches and you can order spooky drinks. Thanksgiving is celebrated at the end of November and is a holiday. I was invited to celebrate it with the family of the lab manager, who created an awesome meal with turkey, baked potatoes, chili, pumpkin cheesecake and apple pie. Some days before the actual Thanksgiving, we had a ‘Friendsgiving’ with the students of the department, were everyone could bring some food, so that we ended up with a huge buffet. Thanksgiving seems to be nearly as big a holiday as Christmas!

I really enjoyed my research stay in Bloomington and am looking forward to going there again next year. The Phillips lab is doing great research and we seem to have a fruitful collaboration. Luckily, I don’t have to wait until next year to see Adrienne again, as she will be visiting Bayreuth University and our department in June. Then it’s time to show her the research at the University, the delicious food of Germany and our stunning nature. 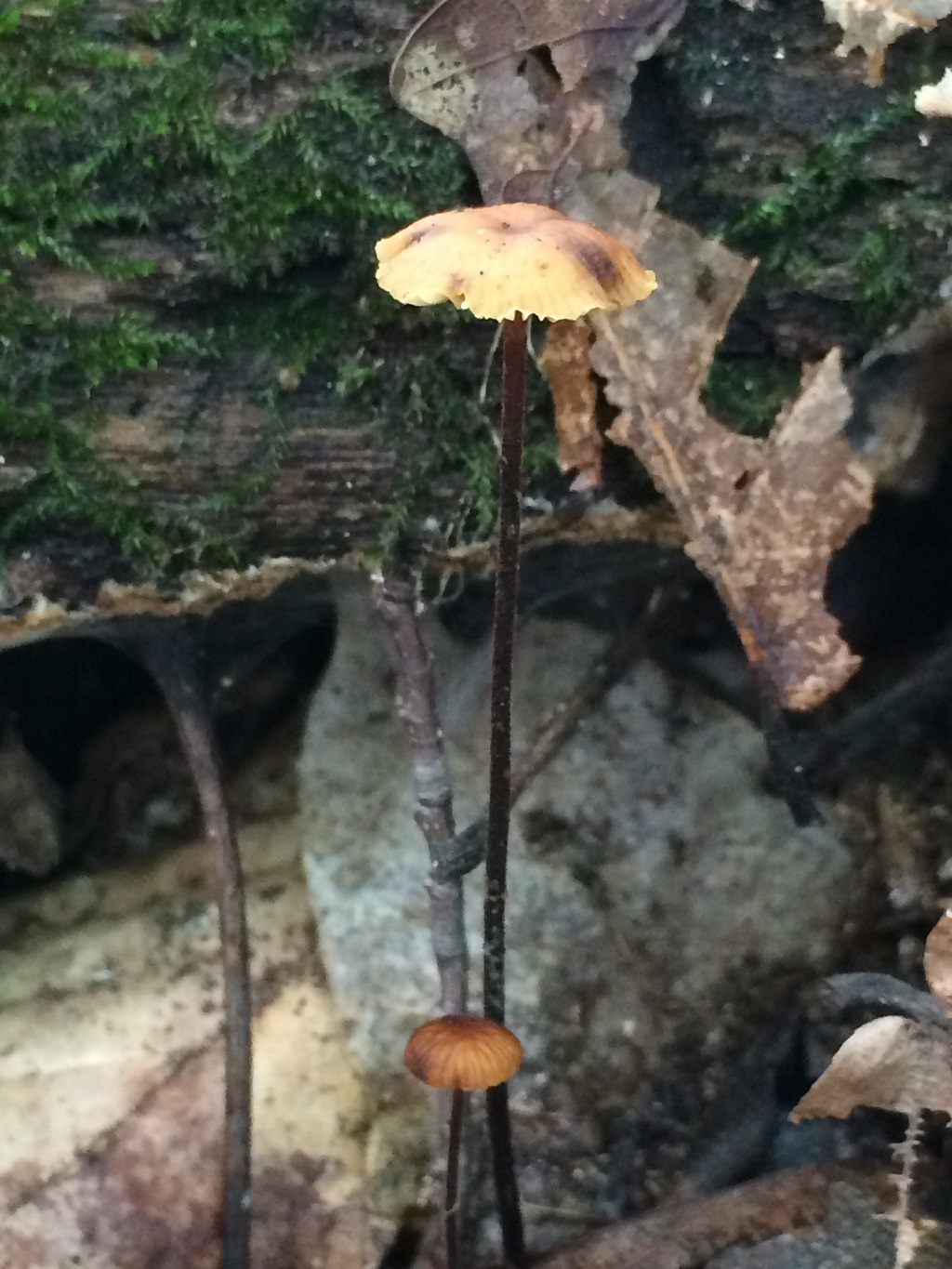 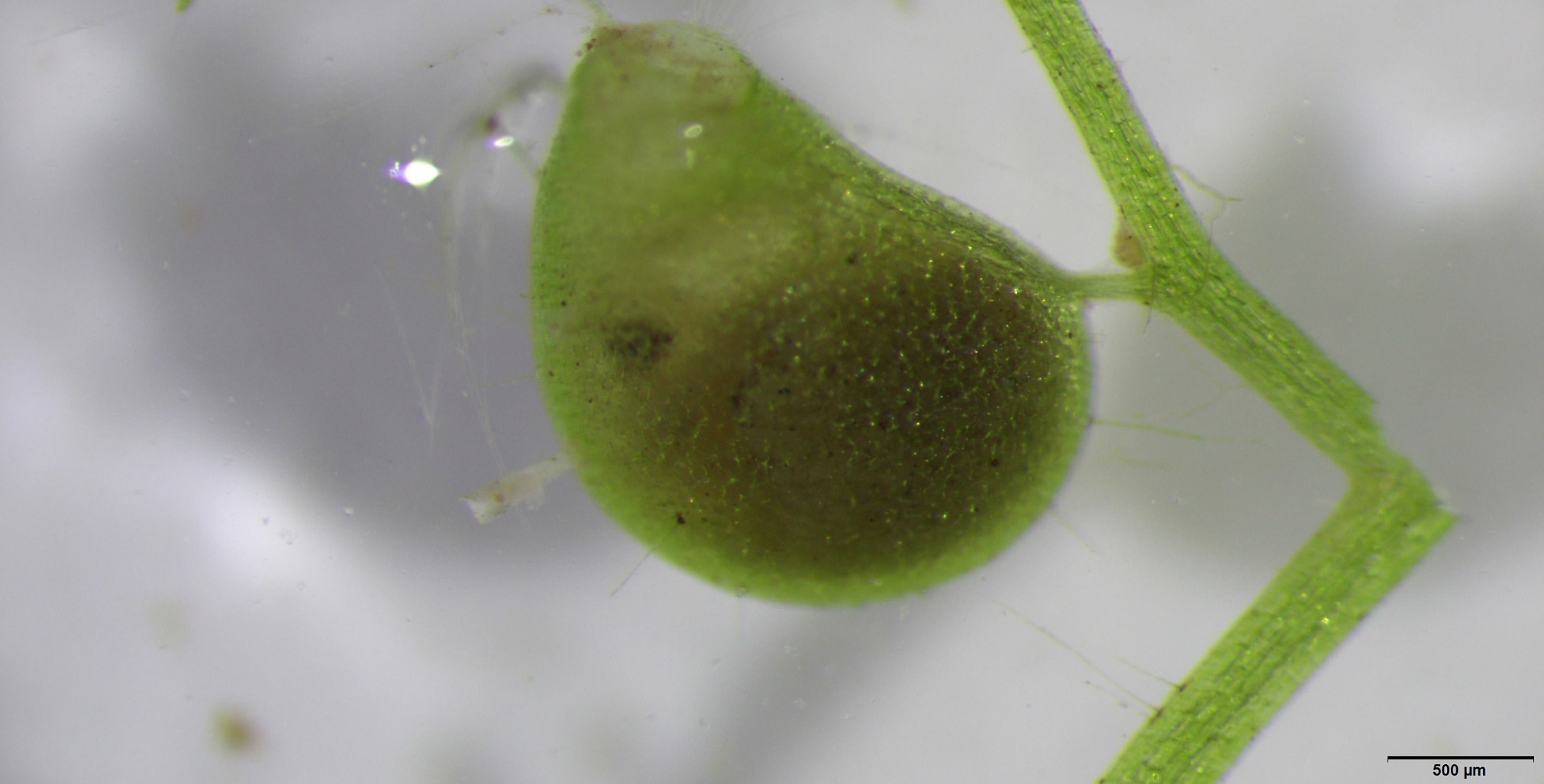 Instead of existing at the bottom of the food chain, some plants have flipped the natural order to become carnivorous. Using specially modified leaf traps, they capture and digest animal prey to tap into an additional nitrogen-nutrient source. But are they picky eaters?

Evolving an extraordinary way of nutrition, carnivorous plants turned the tables by literally eating animal prey to tap on an additional nitrogen-nutrient source. The evolution of trap structures was very creative, for instance from terrestrial sticky leaf traps and pitfalls to aquatic eel traps and suction bladders. Most research on the nutrition of carnivorous plants evaluates the proportion of nitrogen received from a pooled prey sample, however, carnivorous plants may have a picky preference for their prey. Some carnivorous plant species feed on insects, or on seafood like plankton, and some are even vegetarian feeding on leaf litter. Nevertheless, it is not known how picky a carnivorous plant can be. Could the evolution of trapping structures represent a response of the plant to be the first to feed on animal prey before the prey feed on the plant?

To investigate prey preferences of carnivorous plants, we focused on European carnivores from the Lentibulariaceae family. We sampled the terrestrial butterwort Pinguicula which has sticky leaves to trap terrestrial prey, and the aquatic bladderwort Utricularia which traps aquatic prey with suction bladders. We collected potential prey (insects, plankton) and graded them by trophic level (e.g. phytophagous, zoophagous). We applied a stable isotope natural abundance approach linked with a Bayesian inference isotope mixing model to calculate the carnivorous plants` prey-derived nitrogen uptake.

Overall, the investigated plant species gained around one-third of their total nitrogen from prey. Pinguicula species gained most of their prey-derived nitrogen from herbivorous prey, and only some from zoophagous prey. Utricularia benefitted from zooplankton-derived nitrogen, but also benefitted from phytoplankton, suggesting a ‘vegetarian’ component of their diet. Carnivorous plants might be picky eaters after all. 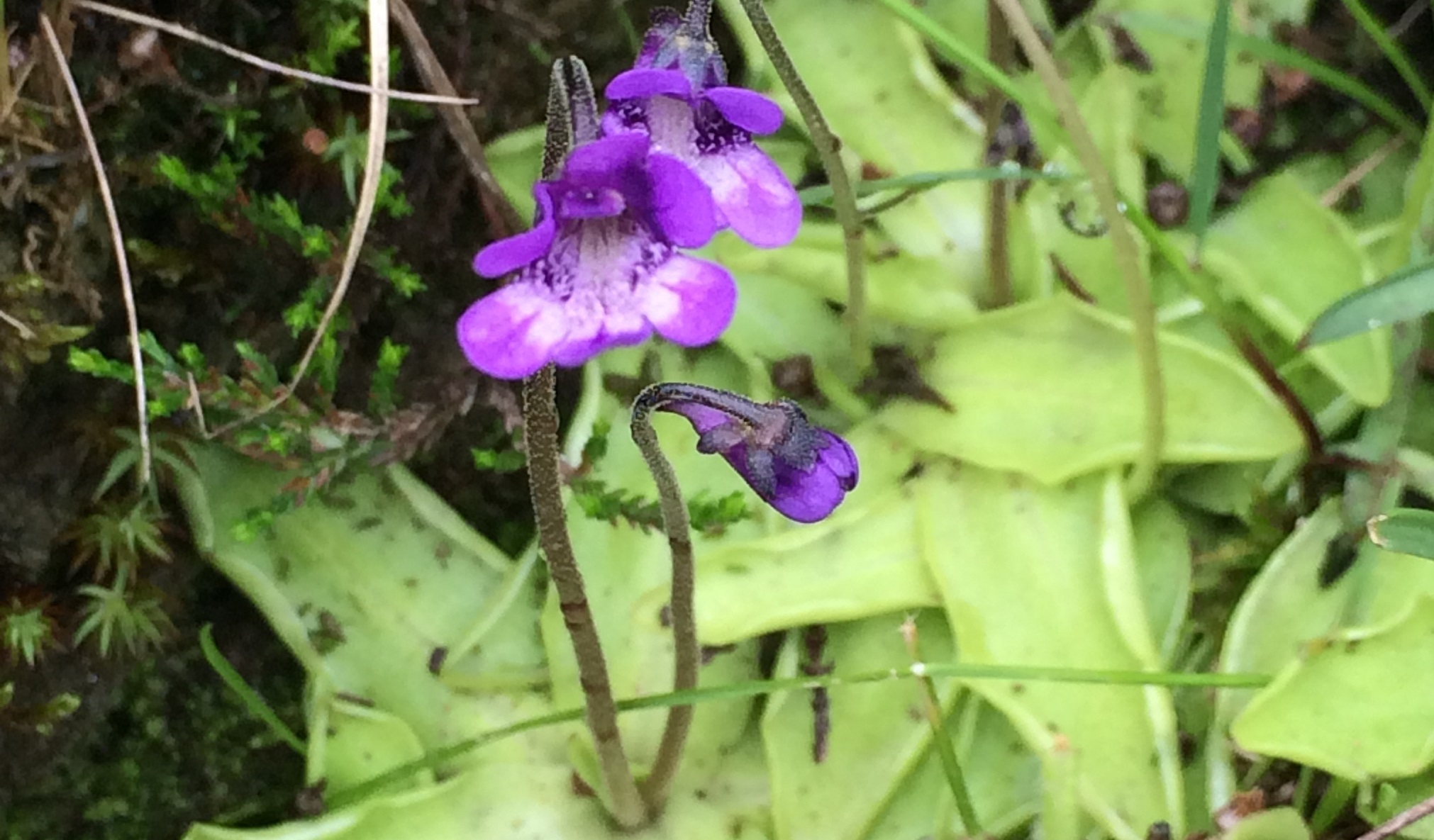 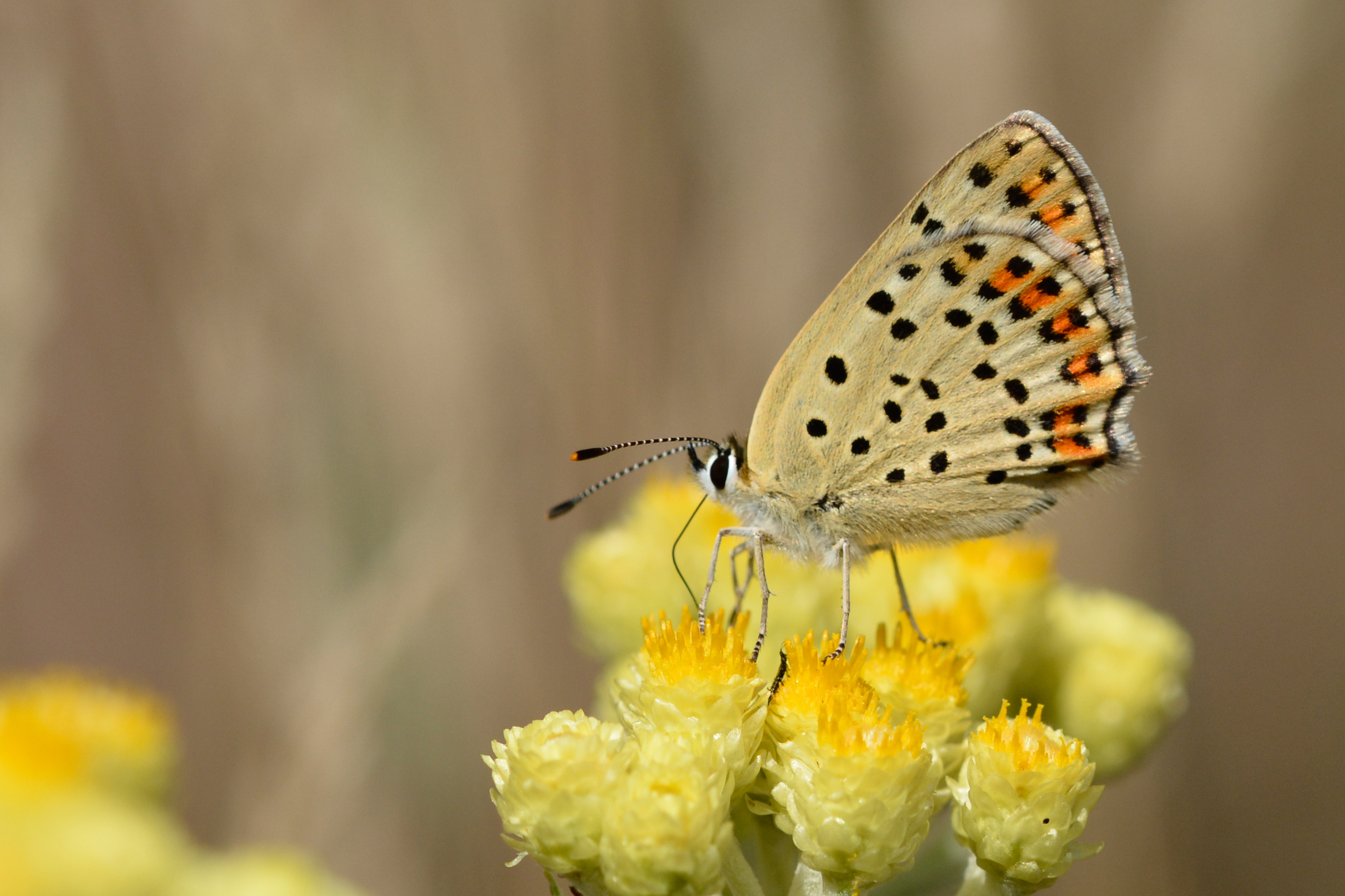 Lepidoptera species as herbivorous insects strongly depend on the nutrient quality of their host plants, which is influenced by agricultural fertilization. Plants use carbon compounds as tissue building blocks and therefore offer only an inadequate diet for herbivorous insects due to their low nitrogen contents. Insects in turn need nitrogen to build proteins as tissue building blocks.  Nitrogen is thus considered as the most important nutrient for herbivorous insects. Several studies confirmed that higher nitrogen contents in the diet increase the performance of Lepidoptera species, i.e. the individuals have shorter development times, higher pupal weights or the survival rate of the larvae increases. However, most of these studies considered pest species and the fertilization treatments were not related to agricultural fertilization.

This was the starting point for our investigation focusing on the question how common Lepidoptera species respond to host plants receiving fertilizer quantities commonly used in agriculture. In our study we considered four butterfly and two moth species, which inhabit different habitats, tolerate different land-use intensities and feed on two different host-plant families. Larvae of these six species were fed either with unfertilized or fertilized plants receiving 150 and 300 kg N ha−1 year−1, respectively. These fertilization treatments correspond to quantities usually applied in agriculture. 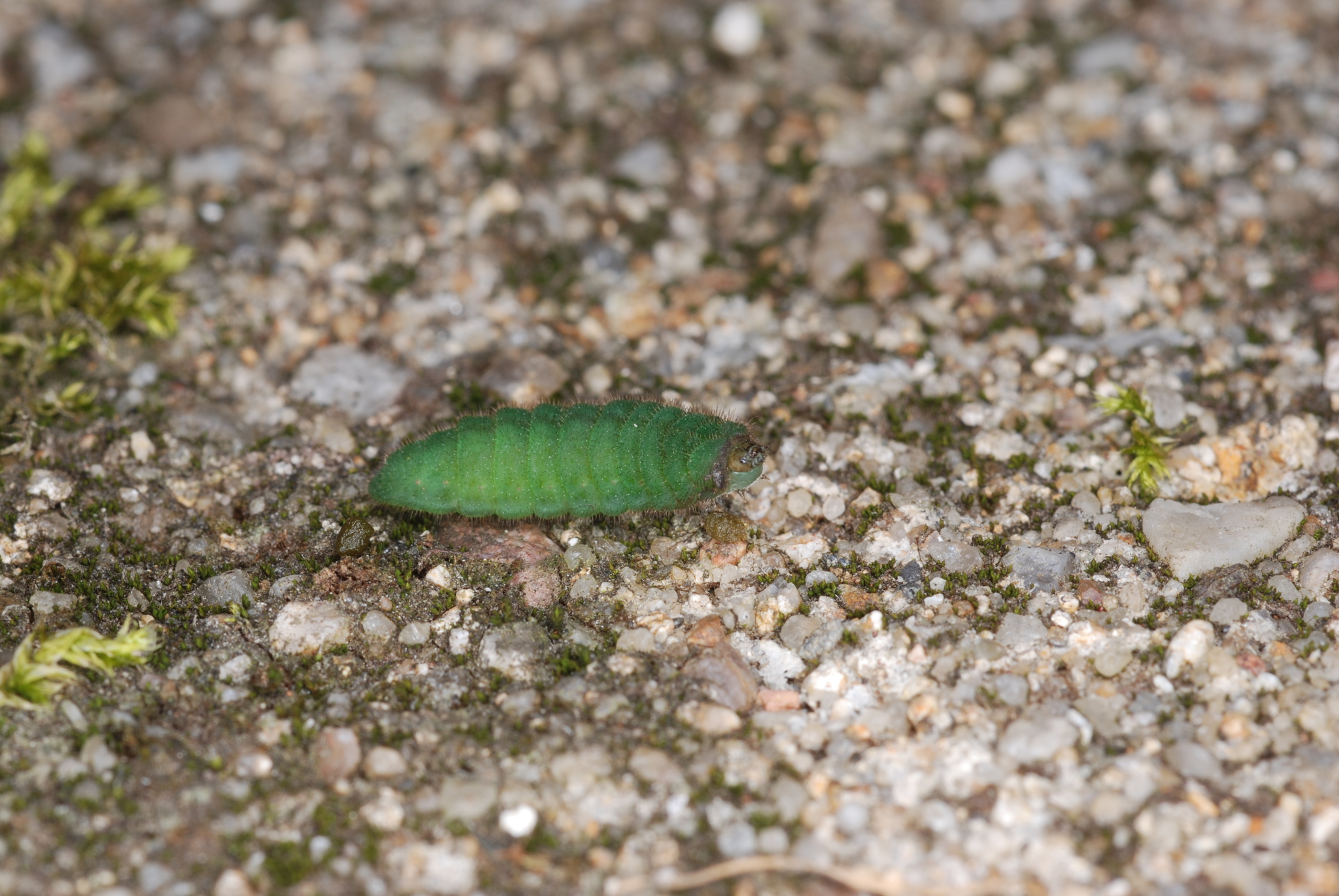 This negative response of all six study species undermines the common assumption that Lepidoptera species benefit from plants with higher nitrogen contents. Instead, the study provides the first evidence that under an experimental setup nitrogen enrichment in plants due to agricultural fertilization significantly increases the mortality of common Lepidoptera species. It is very likely that this effect, which receives so far almost no attention, contributes to the range-wide decline of Lepidoptera species in Western and Central Europe. 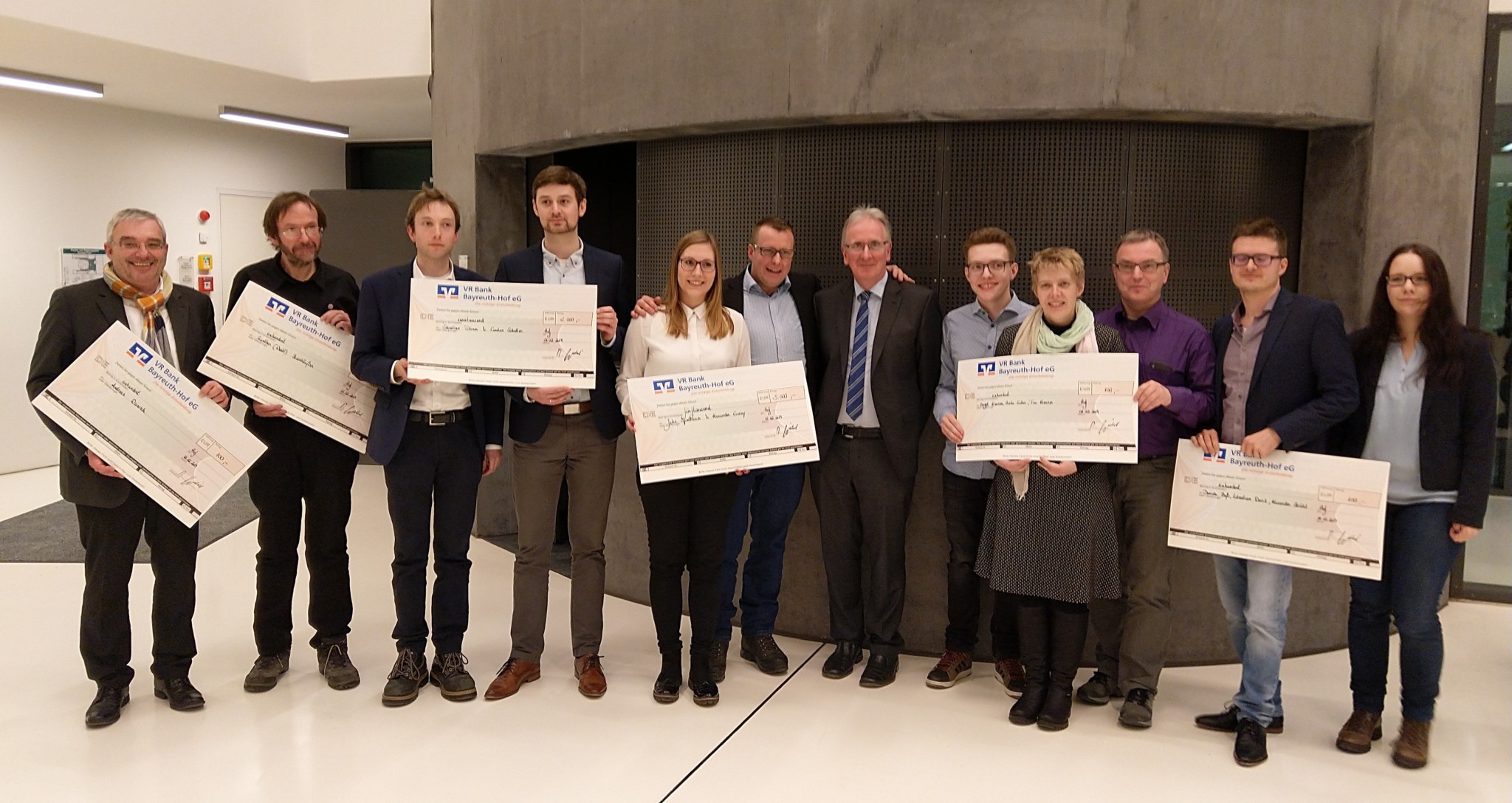 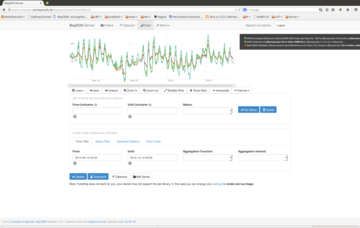