The cup plant (Silphium perfoliatum L.), native in the prairies of eastern North America, is in Germany increasingly cultivated instead of Maize (Zea mays) as a new and ecologically valuable bioenergy crop. However, due to its growth vigour and high reproductive potential, it could be hold a risk of invasiveness.

In the present study, surroundings of existing cup plant fields in the Bayreuth region were systematically screened for spontaneous occurrences of the cup plant in summer 2017 in a 20 m radius around each field.

At 13 of the 15 investigated cup plant fields almost 3500 spontaneously colonised cup plants were mapped in the 20 m radius. The maximum dispersal distance was 6 m on median. Especially open sites were colonised as well as forests and woody sites either gravel and paved roads. 62 individuals (2%) had already developed at least one stem and partially flowers which might develop fertile seeds as a source for further colonisation.

According to our results up to now (1) an invasion potential of cup plant cannot be excluded, but it seems (2) naturally there is only short distance dispersal of cup plant seeds. 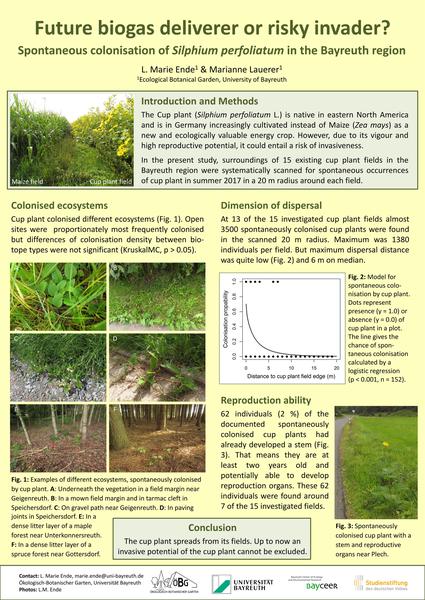