A problem for bacteria in water-saturated soils and sediments is that electron acceptors are sequentially reduced and cannot be rapidly recycled. Cable bacteria can overcome this by spatially separating the redox half reactions. Here, we want to show the relevance of long-distance electron transport by filamentous bacteria in various terrestrial habitats, such as agricultural wetlands and aquifer sediments. Samples were incubated as static flooded laboratory columns, including a vertical agar pillar embedded within the soil cores. Depletion of electron acceptors and pH changes over depth were monitored using microsensors. Changes in community composition were examined by full-length 16S amplicon PacBio SMRT sequencing and fluorescence in situ hybridization. Our results show that the sulfidic zone gradually shifted deeper into the core, accompanied by appearance of a pH peak at the oxic-anoxic gradient, indicating long-distance electron transfer. Microscopy of this zone showed the formation of long filaments. With PacBio sequencing Desulfobulbaceae were discovered in sediment, but not abundantly in the agar pillar. There, other sulfide oxidizers were present, hinting at a function of the agar pillar as possible diffusion highway. To our knowledge, we are the first to report long-distance electron transfer by filamentous bacteria for upland soils. 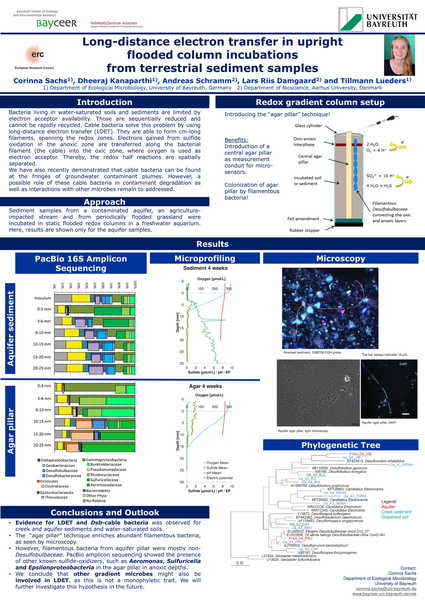