This project concentrated on the investigation of thermal convection in a low-mountain valley starting from the ground. Surface energy exchange measurements were necessary to establish the link between the atmosphere and the underlying soil-vegetation system. For this purpose, an energy balance and turbulence network was installed during the COPS (Convective and Orographically-induced Precipitation Study) experiment 2007.

The network consisted of sixteen stations operated by five collaborating institutes. The working group of the University of Bayreuth coordinated the network and was responsible for a uniform quality control scheme for all turbulence measurement stations and for the upload process on the data base. Several comprehensive and valuable data sets were collected at the World Data Center for Climate (WDCC) in Hamburg. This data is used for further investigation within the COPS scientific community, e.g. for the forcing and validation of applied mesoscale models.

Thermal convection was studied in combination with large-eddy simulations (LES) in the Kinzig valley (Black Forest, southwestern Germany). The numerical model was successfully adapted to the complex conditions in the Kinzig valley during the early-morning boundary layer evolution. The valley atmosphere in these morning hours was characterized by a shrinking stable valley core and by strongly reduced wind speeds for 1-2 hours during the reversal of the valley wind system from the nocturnal down-valley winds to the up-valley winds prevailing during the day . In these situations, at the height of the eddy-covariance (EC) measurements (approximately 2m), free convective conditions (FCCs) were detected with the help of a stability parameter on about 25% of the days during the three month COPS experiment (see Fig. 1). 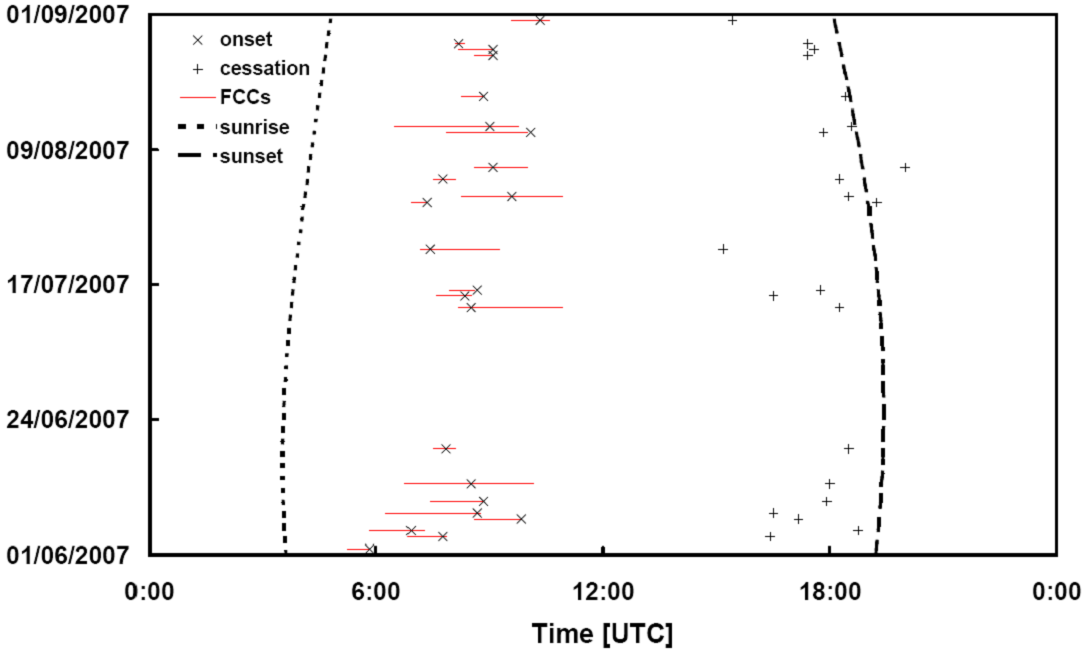 Figure 1: Onset and cessation times of the up-valley wind direction and the corresponding periods with FCCs at the Fußbach site in the Kinzig valley for the entire COPS period. Also depicted are the times of sunrise and sunset.

During these FCCs in the morning, the LES model as well as the Sodar/RASS observations of the vertical wind speed (see Fig. 2) showed the presence of strong coherent updraft structures within the developing convective boundary layer (CBL).

Figure 2: Sodargramm of the vertical wind speed in colour for (COPS IOP 15b) at Fußbach in the Kinzig valley. The vertical black dashed lines indicate the period with FCCs ().

These structures deeply penetrated into the stably stratified valley boundary layer up to approximately the height of the surrounding mountains leading to an effective upward counter-gradient transport during FCCs. Spectral analysis of the EC data in these situations indicated the existence of large-eddy turbulent scales – typical for thermal updrafts in the CBL – already close to the ground. These findings show the importance of the periods of FCCs in the morning hours for the effective injection of surface layer air mass properties into higher regions of the boundary layer. Thus, it also can be assumed that the observed periods of FCCs are important for the preconditioning of the boundary layer for a possible further development of (moist) convection in the course of the day. Moreover, the application of the LES showed that in the observed morning situations, the convective up- and downdraft structures develop in quasi-stationary patterns at specific locations relative to the surrounding mountain ridges. In contrast, in a CBL over flat homogeneous terrain, the locations of convective structures would occur randomly.

Furthermore, regarding the periods with FCCs (see Fig. 1), the energy balance was found to be closed on average. This is in contrast to the unclosed energy balance regarding average conditions during the entire COPS period, where values of the residual typical for heterogeneous landscapes were found. The closed energy balance during FCCs can be explained by the fact that the landscape heterogeneity is of minor importance in case of the more vertical oriented exchange regime during FCCs, so that missing advective flux components became strongly reduced in these situations. Moreover, it was found that in comparable periods with no FCCs, flux components were missing with exactly the proportions of the buoyancy flux ratio, thus suggesting a correction of the energy balance according to the buoyancy flux ratio approach. These results support recent publications on the energy balance closure problem.